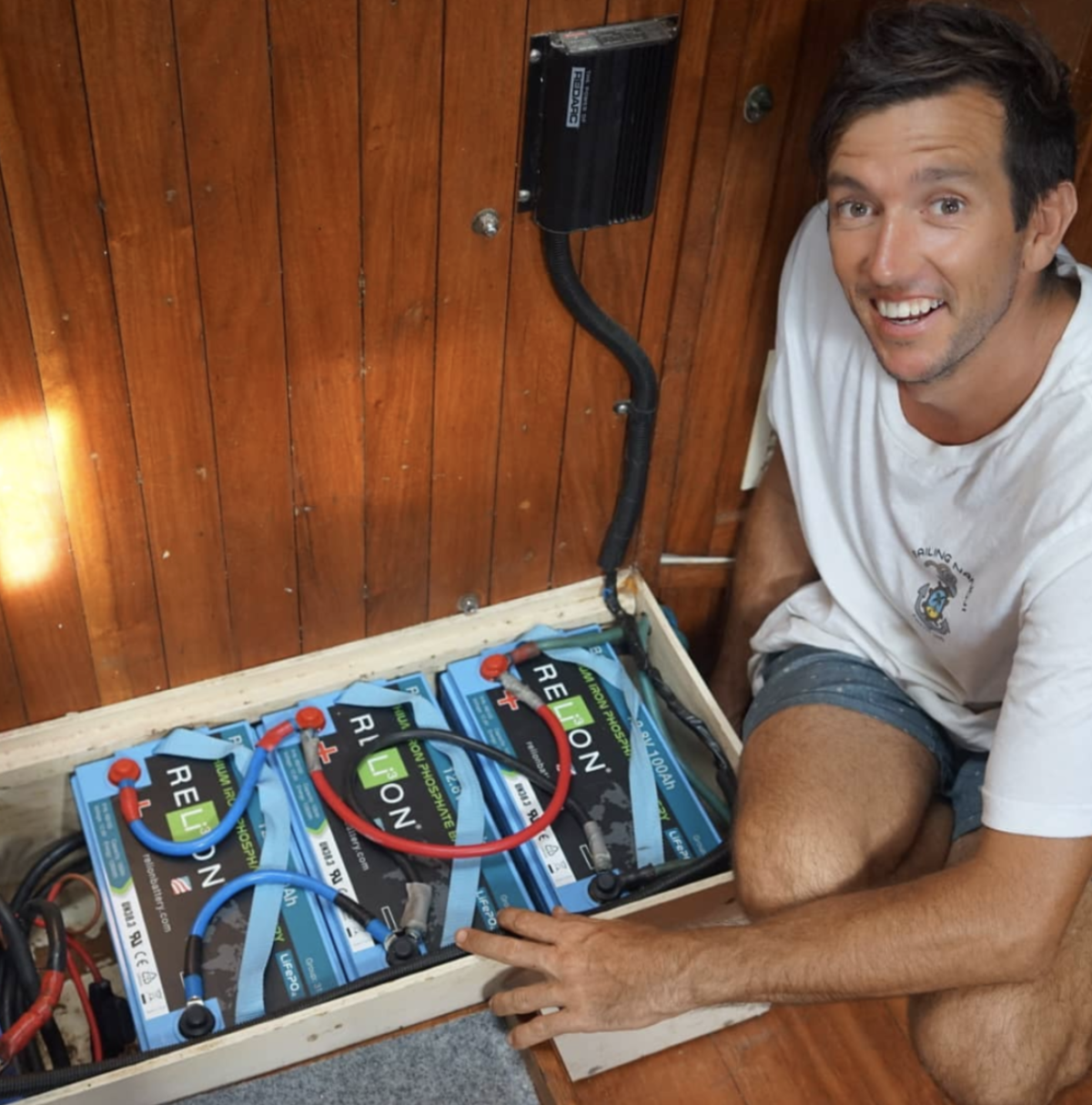 While these digital nomads have been enjoying their newfound time on the water, they quickly grew tired of having to constantly monitor how much energy they had left in their lead-acid battery bank. They wanted to feel as safe as possible when miles offshore as well as focus completely on relaxing and exploring. We recently spoke with Bonita and Yoshi about what it was like to make the switch to living off-grid full-time on their boat and why they transitioned to RELiON RB100 lithium batteries.

Did you have to substantially limit your energy use to transition to full-time off-grid yacht life?

Yoshi: “Before we installed our RELiON battery system, and when we were still relying on AGM batteries, we definitely had to limit our energy use. We thought that was normal since we downsized to living on a boat. However, since we’ve upgraded to more reliable, lightweight and long-lasting RELiON lithium batteries, we’ve been able to power a second fridge, which means we can sail for longer periods of time. We also can now safely sail at night knowing we can send and receive radio signals. This was always questionable with our AGM batteries, as we were having to constantly sacrifice powering one device in order to power another device. With RELiON batteries, the sky’s the limit, as they charge in half the time and can be discharged much more deeply, which results in far more usable energy every day.”

Why did you switch from lead-acid batteries to RELiON solutions specifically?

Yoshi: “We needed to have more reliable power, as we’re 100% dependent on solar and the batteries when we’re in the middle of the ocean. Our lead-acid batteries were simply not handling the constant strain we would put on them daily and they eventually died after just eighteen months. We tried our best to take good care of the lead-acid batteries, but when there were cloudy days and we had to meet work deadlines on our laptops, the system would quickly drain just from charging our laptops. We’d then have to run our boat engine to charge the system, and I didn’t like doing this, both because of the fumes from our diesel engine and the unnecessary wear and tear on our engine. Thanks to RELiON batteries, we finally feel safe and secure knowing we have power, and thereby navigation and the ability to work, at all hours - day or night.”

What would you tell a friend interested in living off-grid on a yacht?

Yoshi: “The second most important factor to consider, other than your sails, are your batteries. If you choose RELiON lithium batteries, I guarantee your life will change for the better and that you won’t regret it. We’re ecstatic with how much more power we now have. Since installing the new RELiON battery system, we don’t have to pay attention to the amount of power we use, as we have peace of mind knowing that there is always enough power to meet our needs. We’ve learned that lithium batteries are actually more cost-effective in the long run because they last so much longer and require far fewer replacements.”

After successfully dropping in RELiON RB100 lithium batteries to replace their lead-acid battery bank, Yoshi and Bonita have been able to sail over 10,000 nautical miles offshore and visit eight different countries by sea. Thanks to their reliable and long-lasting RELiON energy storage system and solar power, they now have the confidence to embark on their longest journey yet - sailing to Africa by crossing the Indian Ocean. Follow along with their sailing adventures on YouTube.